World Math Day is coming soon, on March 1, 2011. You need to register beforehand, before February 28.
What is World Math Day?
It’s a fun worldwide event where students from across the globe compete against each other in answering math facts.

Students play at home and at school against other students around the world in live games of mental arithmetic. Each game lasts for 60 seconds and students can play up to 100 games, earning points for their personal tally. Students can play beyond 100 games during the event, but points will only count to the World Maths Day Mathometer, not their personal point score. The students who answer the most questions correctly appear on the Hall of Fame. There are 5 different levels of play, 20 games on each level. 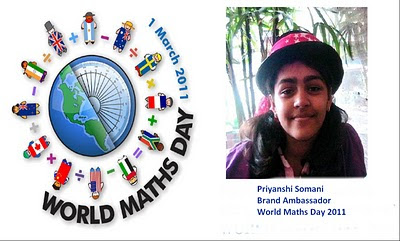 A young girl from Surat, who is not in her teens yet, has been named the Indian Ambassador for the prestigious World Maths Day event to be held next month.
Priyanshi Somani, 12, a mathematical genius herself, has been named the Ambassador from India for World Maths Day, which will be observed on March 1. She will also represent India in the competition, to be held on the same day.
Originally from Surat, Priyanshi has participated in several prestigious Maths competitions around the world. She is now a student of Mayo College in Ajmer.She had won the Mental Calculation World Cup held in Germany last year, and has also found a place in Limca Book of Records.
It is expected that more than 30 lakh students from across the world will take part in the competition. The participants will have to answer 100 mathematical questions, and the fastest to answer all questions correctly, will be declared the winner.
Priyanshi said she considered herself blessed that she was representing the country at the prestigious event. Priyanshi has been inclined towards mathematics since her younger day. She can solve questions of addition, subtraction, multiplication and division of small and big digits, within fractions of a second.
– The Vedic Maths Forum India

6 Most Effective Tips for Board Exam Preparation