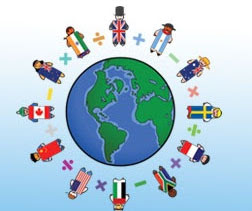 Unite the world in numbers! Keyboards around the globe will be heard on March 3, when students of all nationalities participate in the Fourth Annual World Math Day.

More than 2.5 million students, from 40,000 schools in over 200 countries are expected to take part in the world’s largest education event. Participants can play competitors of similar age and ability in real time, 60-second online arithmetic games.

Last year, 1.95 million students from 204 countries set a world record by correctly answering more than 452 million arithmetic questions. Starting today, students, teachers and parents are encouraged to help beat last year’s record by logging on to www.worldmathday.com to register for World Math Day. The online competition is safe and free of charge.

World Math Day 2010 features an exciting new format with multiple skill levels for all age groups. Participants can play in up to 500 games in the online competition. The World Champion in each category will receive a “Minted Gold Medal;” and all participants will receive certificates for taking part.

“This multi-player game environment is inclusive of all levels of math ability, making math exciting,” said World Math Day Ambassador Scott Flansburg. “Results show that participants will make significant improvement in mental arithmetic speed; we saw an average improvement of 30% for all participants in 2007, 33% in 2008, and 27% in 2009.”

Flansburg, Guinness World Record Holder as the “Fastest Human Calculator,” is helping to inspire passion for math in every student. Flansburg earned his title for his ability to process numbers with amazing speed and accuracy. Now, “The Human Calculator™” (a nickname given to him by host Regis Philbin) is using his gift to show the world that arithmetic can be as easy as “0, 1, 2, 3.”

World Math Day is powered by Mathletics, the learning platform from 3P Learning, the global leader in online mathematics education for school-aged students.