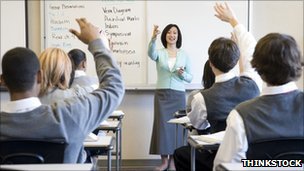 A third of secondary pupils in England fail to reach their potential in maths and a quarter are making insufficient progress in English, figures show.
In total some 200,000 maths pupils and 160,000 English students are failing to make the progress expected between starting secondary school and finishing GCSE, according to official data.Also, the gap in progress between boys and girls has widened in the past year.The schools minister said it was “not good enough”.The figures show how many pupils are attaining the GCSEs they would be expected to gain on the basis of the national curriculum tests known as Sats that they take at the end of primary school.
Those with a level 5 in Sats are expected to attain at least a B grade at GCSE, those with a level 4 should obtain at least a C, while those with a level 3 should achieve at least a D.’Huge concern’The 2010 figures show that, in mainstream maintained schools, more than 37% of pupils failed to make the progress expected of them in maths, while more than 29% missed their GCSE targets in English.
However, these figures were down from 41% in maths and 34% in English in 2009, continuing a trend of gradual improvement.But more boys than girls are failing to fulfil their potential – with nearly 35% of boys missing their English targets compared with just less than 25% of girls.
The gulf between them has widened slightly, from 10.3 percentage points in 2009, to 10.7 in 2010.The difference is less pronounced in maths – with 38% of boys failing to make the expected progress, compared with nearly 36% of girls.But this gap has also widened slightly, from 1.5 percentage points in 2009 to 2.3 in 2010.Schools Minister Nick Gibb said it was “not good enough” that more than 200,000 pupils in maths and 160,000 in English were still falling short of expected progress.
“And it’s a huge concern that one in three boys fails to reach their potential in English – with the gap with girls remaining stubbornly wide,” he said.
The further behind pupils were at 11, the less likely they were to catch up later, he added.He said government reforms would “give all pupils a solid grounding in reading and arithmetic, with the right catch up support if they start to fall behind”.
Source: BBC news