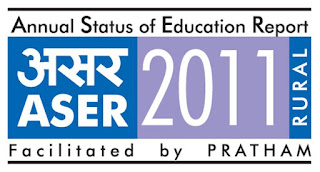 The Annual Survey of Education 2012 by Pratham, an NGO focused on primary education, has caused quite a stir in the education circles in India. The report says that 46% of Std V students can’t solve simple calculations among other things.
The report is in sync with the Programme For International Students Assessment (PISA) which ranks India as 73 among 74 countries in a study of maths, science and reading.
US President Barack Obama had warned that America’s dipping proficiency
in mathematics was putting it at a disadvantage with India and China,
but Indian policy planners need to worry too. In 2010, 29.1% children in
Class V could not solve a two-digit subtraction problem without seeking
help. This proportion increased to 39% in 2011 and 46.5% in 2012.Barring Andhra Pradesh, Karnataka and Kerala, nearly every state showed
a decline in math learning while reading levels went down in Haryana,
Bihar, Madhya Pradesh , Maharashtra and Kerala . Ironically, 2012 was
the ‘year of mathematics‘.
We at Vedic Maths Forum India are seriously concerned about this. Whatever the Government is doing is clearing backfiring and not working. The Govt of India needs to look into this and try and boost up the maths skills in primary education.
I was recently at a maths conference and after interacting with the officials from the Govt, I felt that they are blind to such reports. They have seriously ignored reports like the PISA. In this regard,I also wonder why an International Study like Trends in Mathematics and Science Study’ (TIMSS) is not conducted in India?
I feel sad to see that the state of Maths in our country is seriously declining. May be…just may be we could do something about it and bring about a complete makeover in the way we teach Math in India.