Home Articles My Experience as a Parent teaching Vedic Maths
SHARE
Facebook
Twitter
My Experience as a Parent :
I completed the
Vedic Maths Teacher Training Course in June 2013 and was very eager to share
what I had learnt with my 9 year old son, who was then in Grade 4. He showed
very little interest, because it was different from what they had learnt at
school. I did not try to force this on him because I was content with his marks
at school (75 – 80%).
What still
concerned me, however, was that he was still slow when it came to the bonds
(addition and subtraction) and his times tables. It was extremely frustrating
for me to see him count on his fingers and count in multiples to answer the
multiplication tables. So I taught him the “Finger Multiplication – the
Universal Times table and 9 Times Table.” He understood both methods but was
more comfortable with the 9 Times Table. It took him some time to work out the
answers using the Universal Times Table.
My other concern
was that even though he was fairly good at Maths, there was no sense of
excitement – classwork and homework was tedious and boring. This year, I made
another attempt to introduce the Vedic Maths techniques.
The topic being
covered at school was subtraction of 4 digit numbers so I showed him how he
could get the answer quicker for some sums using “All from 9, last from 10”. He
was so excited when he “got it”, that he went away and created his own examples
to work with and got his dad and grandma to give him bigger numbers to subtract
so that he could impress them! He even tried teaching his friends when they
came to visit.
The next topic
we worked on was addition and subtraction of 4 digit numbers using the Left –
Right method. I asked him to first look at the numbers and make a note in the
column where will be a carryover for addition or you have to “borrow” for
subtraction. The next step was then to add/subtract per column from Left to
Right. Again he understood the reasoning and the method and completed his homework
very quickly – he even checked all the answers using the reverse operation.
I was reading
through the book, “Elementary and Middle School Mathematics – Teaching
Developmentally” by John A. Van de Walle. There was a chapter on helping
children master the basic Maths facts. What I found interesting, was that it
was recommended that rather than drilling initially for bonds and tables or
presenting a class with different strategies, it would be more effective to get
the learners to come up with their own strategies for simple calculations such
as “8 + 6” or “5 + 6”. Their different strategies would then be discussed in
class but each child would eventually use the strategy that works best for
them. Then only does the teacher help the child learn memorise the strategy.
I decided to try
this with my son for the bonds. He showed me that for the example “6 + 7”, he
would first “make up ten” by adding 3 to the 7 and then add another 3 to get
13.  We then discussed the other ways you
could obtain the answer such “double 6 and add 1”, but he felt that “his
method” gave him the answers much faster.
For the
subtraction, we used the “think addition” approach, e.g. for “14 – 8”, we
looked at what number to add to 8 to get the number 14. Here again, he used the
same method as before of first “making up ten” and was able to work out simple
subtractions quickly, without counting on his fingers!
The times table
was still a challenge, since there were some calculations that he could not
remember. Even though he knew the “Finger Multiplication”, he did not want to
make us of this method. For the calculations he could not remember, we then worked
from what he knew, e.g. for “7 x 8”, he knew “5 x 8 = 40” and then he
added the eights to get to 56. For other calculations, I demonstrated that
breaking down the numbers will also help work out the answer quickly, e.g. “8 x
8 = 8 x 4 x 2”. I extended it to bigger numbers like 9 x 16 and he was so
excited when he worked out the answer mentally by changing the sum to “9 x 8 x
2”!
For division, we
only worked on division by 5 since this times table is easy to remember and
here I introduced him to divisibility rules. By first asking him to study the 5
x table, with some guidance, he was able to see that the numbers ended either
in 0 or 5. Then I gave him a few numbers to divide by 5. He was able to see, just
by observation, what the remainders would be. He completed the division fairly
quickly and checked the answers as well (something he was not happy doing
previously)!
Now that I know the
strategies that he is comfortable with, I will reinforce them using flashcards
and get him to practise some examples every day. Aside from him
being more comfortable with Maths in a short space of time, I am happy that to
see him getting excited about Maths! 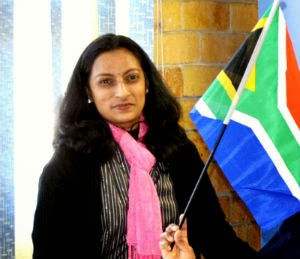 Mrs.Neshni Naidoo is the Director of Vedic Maths Forum South Africa. She loves reading and is instrumental in solving the Maths Crisis in South Africa. Her interest in Vedic Maths stemmed from a desire to find an alternate way to teach Maths at South African schools. Traditional methods used are time-consuming, confusing and don’t allow for creative thinking. With Vedic Maths, the vision is to create a love for Maths, eliminate the fear associated with Maths and develop a new generation of Mathematicians and Scientists who will make South Africa proud.
Know more about Vedic Mathematics:
https://vedicmathsindia.org