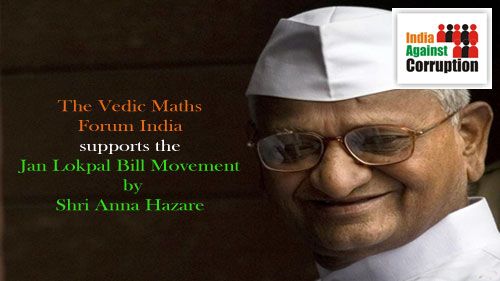 India is currently witnessing a mass movement against corruption at a scale which has never been seen before.Today a Billion Indians have united themselves in a Sutra (Thread) to introduce the Jan Lokepal Bill in the country and to deal with corruption once and for all.
India Against Corruption (IAC) is a citizen’s movement to demand strong anti-corruption laws. Lokpal bills were introduced several times since 1968, yet they were never passed by the Indian Parliament. After a fast by veteran social activist Anna Hazare and widespread protests by citizens across India the Government of India constituted a 10-member Joint Committee of ministers and civil society activists to draft an effective Jan Lokpal Bill. The primary focus of IAC movement is to ensure a strong Lokpal bill
The Vedic Maths Forum India strongly supports the movement and we invite your comments on the issue. Read more on the Movement here