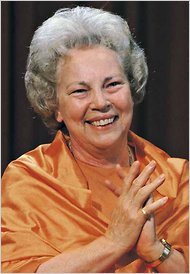 Sri Sri Daya Mata , who for more than five decades was the leader of one of the most influential Hindu groups in the United States and an ardent advocate of the healing power of meditation, died on Tuesday at the group’s retreat for nuns in Los Angeles. She was 96.
On December 1, 2010, [IST] our beloved Sri Sri Daya Mata, President of Yogoda Satsanga Society of India/Self-Realization Fellowship founded by Paramhansa Yogananda, peacefully left her mortal form. Her life, so radiant with the light and love of God, has joined the vast ocean of His omnipresent love.
Sri Daya Mata was instrumental in the United States tour in 1958 of His Holiness Jagadguru Bharati Krishna Tirthaji Maharaja – the founder of Vedic Mathematics. She arranged for His Holiness’s talks on Vedic Mathematics at Caltech, San Diego College, Stanford among others and was instrumental in bringing a Shankaracharya to the West for the First time ever.
The discourses of His Holiness were recorded painfully by Sri Daya Mata and was published in a book titled ‘Vedic Metaphysics’. She also contributed to the biography of Tirthaji by T.N.Pande.
The Self-Realization Fellowship was founded in 1920 by the Indian yoga master Paramahansa Yogananda soon after he arrived in the United States as a delegate to the International Congress of Religious Liberals in Boston. He became well known as the author of “Autobiography of a Yogi,” which was first published in 1946.
We at The Vedic Maths Forum India pay our deep respects to Smt Daya Mata and remember her in our thoughts and prayers.