The whole world is under the covers of Harry Potter Mania, with release of the seventh and final book Harry Potter and the Deathly Hallows and the fifth movie Harry Potter and the Order of the Phoenix. I like this Harry Potter stuff and bring to you from some of its pages some interesting content about Math-Arithmancy. No No this got nothing to do with Vedic Math,though the method is very much like finding the Digit Sum (Digital Root) of your name but its just some trivia for our young readers out there.

Arithmancy is one of Hermione’s favorite subjects at Hogwarts, because it is a very precise, measurable and almost scientific method of predicting the future, a way to apply book studying to divination, not normally something that can be learned out of books.document.write(flat(‘gniyd’));

Arithmancy is a method of divination by numbers first used by the ancient Greeks. They assigned values to the letters in the names of combatants to foretell the outcome of battles. Later, in the ninth century BC, the Chaldeans in Arabia (where our modern number system also comes from) practiced a form of arithmancy that divided their alphabet into three parts, each part composed of seven letters which they attributed to the then known seven planets. Wizards still use a similar system today, all these thousands of years later. In Harry Potter’s world, Wizards can use arithmancy to help predict trends in the future. Predicting the future can be used in conjunction with other forms of magic to increase your power or chances of success. For example, if you’re going to make a love potion for someone you fancy, wouldn’t it be helpful to know what day they’re more likely to be in a receptive mood? The most basic form of arithmancy is used with the names of people you want more information about. First, you must convert the name into a number. Each letter of the alphabet corresponds to a number, as shown in this chart:

For example, the following numbers correspond to the letters in Hermione’s name:

Next, you “reduce” your number by adding your numbers together until all you are left with is one digit. To reduce the numbers in Hermione’s name:

When working with someone’s name, you can calculate three different numbers for them. The first, called the “Character Number”, can be used to find out the general personality type of the person, and is derived by using all the letters of the name, as we did above. The second number you can calculate for someone is their “Heart Number”. This represents the individual’s inner life and can indicate desires and fears hidden from others. You calculate it as we did above, but using only the vowels contained in their name. Hermione’s Heart Number is 4:

The final number you can calculate for someone is their “Social Number” and is calculated using only the consonants of the name. The Social Number represents the outer personality, the face an individual shows to the outside world. Hermione’s Social Number is 9:

While this sort of thing looks like fun for someone as studious as Hermione, that math’s a lot of work for most people, so I have created a program to calculate the numbers for us. You can access the Arithmancy Calculator here. Now, we can do something with the numbers. When people are involved, each number also corresponds to a kind of person or personality. Here is a chart of what the personality numbers mean. Both this chart and the Arithmancy Calculator above open in pop-up windows so you can keep them on the screen together while also following along with the rest of this article, or for doing your own research. At the most basic level, simply comparing people’s Character Numbers can aid in seeing if they would be compatible. It’s interesting to see how these numbers apply to people we know in the Harry Potter books. For example, Hermione’s very good friends Harry Potter and Ron Weasley are both 2’s. They, indeed, became instant best friends from the first moment they met. A generation earlier, Harry’s father James Potter, and James’ best friend, Sirius Black, Harry’s godfather, were both 7’s. And Ron’s parents, Arthur and Molly Weasley, are both 5’s. 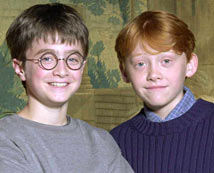 We can also see some amazing paralells to people we know when we look at the numbers using the Personality Numbers chart. For example, Albus Dumbledore is a 1, and from the chart we can see that 1’s are leaders. Gilderoy Lockhart is a 3, which the chart describes as unfocused and superficial. Severus Snape is a 2, and 2’s are known to be of two minds, containing opposing forces, both good and evil. Professor Snape, who seems to be on the Dark side but who also works for the good guys, is a classic 2. Interestingly, or perhaps some people might say ominously (but I wouldn’t), as we’ve seen Harry Potter is also a 2, reflecting the battle between Harry’s good side, and those bits of you-know-who’s powers that were inadvertantly transferred to Harry when you-know-who’s killing curse backfired.document.write(flat(‘llik’)); Different numbers can also be compatible and fit together in many interesting ways. Take, for example, Ron’s twin brothers Fred and George, who get along and work together better than any twins we’ve ever seen, as if they complete each other. Fred Weasley is a 6 and George Weasley is a 3. The number 6 represents harmony, as in two getting along, and 3 represents completeness, two becoming one. In addition, they both add up to 9, which signifies completion to its fullest degree. Although they’re typical teenagers separately, together Fred and George are a formidable force. Argus Filch, the Hogwarts caretaker, might even use the word dangerous. (Everyone else just thinks they’re very funny.) While we’re on the subject of the completeness of 9, try typing the entire alphabet into the Arithmancy Calculator and you’ll see why Hermione loves Arithmancy so much. The results are spooky! Another pair of twins we know is equally as interesting. Twin sisters Parvati and Padma Patil have the same Heart Number, which shows their sisterly love for each other, but they don’t have compatible Character Numbers. Padma Patil is a 3, which represents completeness, and Parvati Patil is a 1, a loner. The Hogwarts Sorting Hat obviously knew this when it sorted Parvati into Gryffindor and Padma into Ravenclaw, even though brothers and sisters are usually sorted into the same houses. Once we see how these numbers play out around us in the present, we can use the same principles to judge what might happen in the future. For example, no one knows if Hagrid and Madame Maxime will eventually get together, but Rubeus Hagrid and Olympe Maxime are both 7’s. In regard to other possible relationships, Viktor Krum‘s Heart Number is 9, the complete number. People who have a Heart Number of 9 frequently are loners, not feeling in need of another for completion. And as we know, although Viktor was fun to be with, Hermione doesn’t end up with him… document.write(flat(‘lliw’));