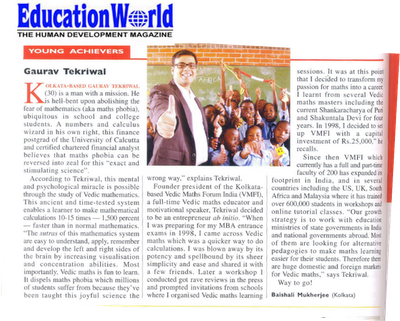 Kolkata-based Gaurav Tekriwal (30) is a man with a mission. He is hell-bent upon abolishing the fear of mathematics (aka maths phobia), ubiquitous in school and college students. A numbers and calculus wizard in his own right, this finance postgrad of the University of Calcutta and certified chartered financial analyst believes that maths phobia can be reversed into zeal for this “exact and stimulating science”.
According to Tekriwal, this mental and psychological miracle is possible through the study of Vedic mathematics. This ancient and time-tested system enables a learner to make mathematical calculations 10-15 times — 1,500 percent — faster than in normal mathematics. “The sutras of this mathematics system are easy to understand, apply, remember and develop the left and right sides of the brain by increasing visualisation and concentration abilities. Most importantly, Vedic maths is fun to learn. It dispels maths phobia which millions of students suffer from because they’ve been taught this joyful science the wrong way,” explains Tekriwal.
Founder president of the Kolkata-based Vedic Maths Forum India (VMFI), a full-time Vedic maths educator and motivational speaker, Tekriwal decided to be an entrepreneur ab initio. “When I was preparing for my MBA entrance exams in 1998, I came across Vedic maths which was a quicker way to do calculations. I was blown away by its potency and spellbound by its sheer simplicity and ease and shared it with a few friends. Later a workshop I conducted got rave reviews in the press and prompted invitations from schools where I organised Vedic maths learning sessions. It was at this point that I decided to transform my passion for maths into a career. I learnt from several Vedic maths masters including the current Shankaracharya of Puri and Shakuntala Devi for four years. In 1998, I decided to set up VMFI with a capital investment of Rs.25,000,” he recalls.
Since then VMFI which currently has a full and part-time faculty of 200 has expanded its footprint in India, and in several countries including the US, UK, South Africa and Malaysia where it has trained over 600,000 students in workshops and online tutorial classes. “Our growth strategy is to work with education ministries of state governments in India and national governments abroad. Most of them are looking for alternative pedagogies to make maths learning easier for their students. Therefore there are huge domestic and foreign markets for Vedic maths,” says Tekriwal.
Way to go!
Baishali Mukherjee (Kolkata)
Source: Young Achievers, Education world Online
– The Vedic Maths Forum India