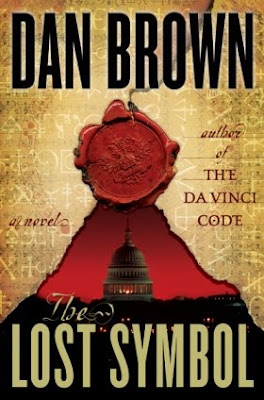 Today, I just finished the latest book by Dan Brown – The Lost Symbol. I must admit I am a big fan of him since his I read his last book Da Vinci Code and find his novels riveting and a complete page turner.
I like the twists in Brown’s books and of course the Mathematics you find in his books. He does a great job educating masses about some recreational maths.The last book told us about the Fibonacci Sequence and the New Book tells us about Ancient Magic Squares and that it originated in India.
Magic squares have fascinated humanity throughout the ages, and have been around for over 4,120 years. They are found in a number of cultures, including Egypt and India, engraved on stone or metal and worn as talismans, the belief being that magic squares had astrological and divinatory qualities, their usage ensuring longevity and prevention of diseases.
As far back as 550AD, Varahamihira used a 4 by 4 magic square to decribe a perfume recipe, but the earliest known Indian writings about an order 3 square comes from 900AD, as a medical treatment!
The 3×3 magic square was used as part of rituals in India from vedic times, and continues to be used to date. A well known early 4×4 magic square in India can be seen in Khajuraho in the Parshvanath Jain temple. It dates from the 10th century. 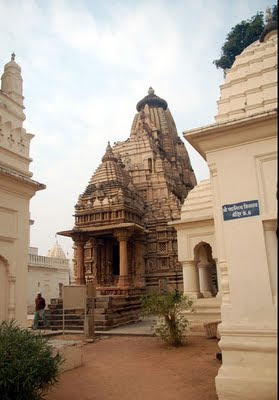 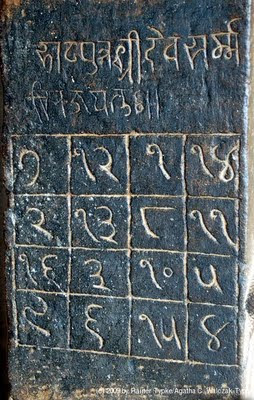 Above you can see the Parsvanath Temple in Khajuraho and the Chautisa Yantra, Since each row, column, diagonal, 2×2 sub-square, and the corners of each 3×3 and 4×4 square, sums to 34. Thirty Four in Hindi means Chautis hence Chautisa Yantra.
The Kubera-Kolam is a floor painting used in India which is in the form of a magic square of order three. Kubera Kolam has a belief that when drawn the house will never be short of money.Kubera is the God of Wealth. The numbers are from 20-28. When we sum the numbers across the rows and columns they always end up in 72, which again boils down to 9 which is considered a divine number. 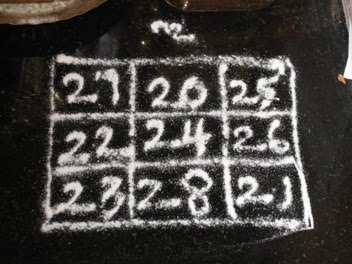 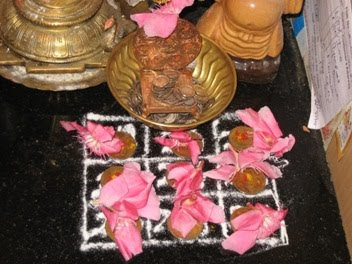 Above the Kubera Kolam before being worshipped and after Flowers & Coins adorn it. Its a Powerful thing to keep in a House as per Vedic Traditions.

Dan Brown’s book also among other things talks about the Institute of Noetic Sciences which has impressed me a lot with its findings! Though they are basically spiritual in nature – I will save that for another Day!

Also I would like to point out that Prof. Unkalkar’s Book Magical World of mathematics available in our bookstore www.vedicmathsindia.org also teaches how to make your own magic squares. We also have that on video by the proffessor himself on Advanced Vedic Mathematics on a DVD set which will be released soon. Meanwhile you can go through his exceptional book. His new Book “Excel with Vedic Mathematics” is increasingly getting popular. We have received over 120+ responses and inquiries for his books since our last post. If you have more friends and aquaintences interested in it, please let us know and we will be happy to help.