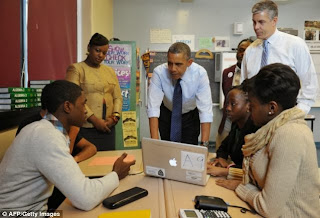 NEW YORK: Billions of people from countries like India and China are striving hard to “out-educate” Americans in mathematics and technology, President Barack Obama has said while stressing on education reforms to prepare Americans for a global economy where “jobs can go anywhere.””In previous generations, America’s standing economically was so much higher than everybody else’s that we did not have a lot of competition,” Obama said.

“Now you have got billions of people from Beijing to Bangalore to Moscow, all of whom are competing with you directly. And they are — those countries are working every day to out-educate and out-compete us,” Obama said in his remarks to students at the Pathways in Technology Early College High School in Brooklyn here on Friday.

“And every year brings more research showing them pulling ahead, especially in some of the subject matter that this school specialises in — math and science and technology. So we have got a choice to make,” he said.

He said if the workforce is not educated enough, it will be left behind and find it hard to get a job that pays a living wage.

“We live in a 21st century global economy. And in a global economy, jobs can go anywhere. Companies, they are looking for the best-educated people, wherever they live, and they will reward them with good jobs and good pay,” the president said.

“We can just kind of shrug our shoulders and settle for something less, or we can do what America has always done, which is adapt. We pull together, we up our game, we hustle, we fight back, we work hard, and we win,” he said.

Obama joked that he had asked students at the Brooklyn school if they could help him help his daughter Malia with her math homework.

“I don’t know if some of you have experienced this where you get to the point where your children ask you for help and you suddenly realise you have no idea what’s going on,” he said amid laughter from his young audience.

The President said America has to educate its young people and prepare them for the global economy.

With the cost of higher education escalating, Obama said he is working hard to reduce the burden of student loans on young people.

Obama stressed that America needs a budget that is responsible, fiscally prudent and one that “cuts what we don’t need, closes wasteful tax loopholes that don’t create jobs, freeing up resources to invest in the things that actually do help us grow — things like education and scientific research, and infrastructure, roads, bridges, airports.

Having dealt with the government shutdown, Obama has his eyes set on passing the country’s immigration reforms.